Critiquing "I Don't Have Enough Faith to Be an Atheist" (p.1!) 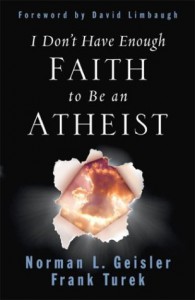 That Geisler and Turek have written a book about how much more intellectual sense it makes to be a Christian is, to my mind, interesting in itself for what it says about modern Christianity.

The title isn't simply a catty remark about how ridiculously unsupportable Geisler & Turek believe atheists' world view to be; it's the central contention of their book - that one reason to believe in Christianity is because it's the shortest leap of faith available. As early as their introduction, they set out very carefully an understanding of faith as an unnecessary evil, one which everyone is forced to employ to the least possible degree because none of us have omniscience. And they are very clear on the point; later they spend part of their second chapter insuring we understand the only good reason to believe something is if it's supported best by the available data.

Which is not an argument with which I'm inclined to disagree... but, er, isn't it an unbiblical position? I mean, I can't be the only one who remembers that faith is considered a good thing in the Word, right? Isn't Faith one of Paul's three virtues?

I realize I'm open to charges of equivocation here. "Faith" has a number of definitions and the one Geisler & Turek use ("belief that is not based on proof") is different from the faith Jesus finds and applauds in a Roman soldier ("confidence or trust in a person or thing"), or the faith of the three Hebrews before Nebuchadnezzar's oven ("the obligation of loyalty or fidelity").

But it's not different from what Jesus is talking about when He says, “Have you believed because you have seen me? Blessed are those who have not seen and yet have believed” (John 20:29). Or when He demands we come to Him with the belief of little children (i.e. unquestioning) in Matthew 18:3 & 19:13-15, Mark 10:13-16, and Luke 18:15-17. Or when God informs Israel that any messenger capable of "signs and wonders" should nevertheless be distrusted if his message does not conform to prior revelation, so that even actual, first-hand evidence of the supernatural is no excuse to change one's mind. No, these are all ringing endorsements for faith irrespective of evidence. In fact, the less evidence you need the better.

The modern rationalist, of course, dismisses this world view as a near-perfect inversion of the true respective worths of faith and evidence. In I Don't Have Enough Faith to Be an Atheist, it's clear Geisler & Turek agree it's more important to have evidence than faith, as do many other Christians here in the West (just check out Webmaster Joe's own introductory posts on the book In Search of A Confident Faith. The first one's here, second one's here). But by doing so, they in effect cede that the Bible's own point-of-view about belief is antiquated.

If you ask me, that's not a good way to start an argument for the Bible's inerrancy.

NEXT: The book's introduction.

This entry was tagged. Apologetics Bible Frank Turek I Don'T Have Enough Faith To Be An Atheist Norman Geisler