By Adam Volle in Books 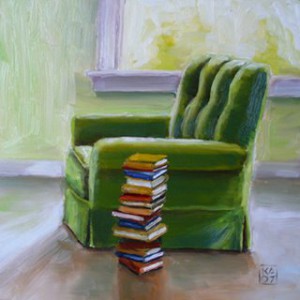 Counting up how many books I've read in the last 3+ months, I find that I've just passed my reading list's halfway point; I'm on my nineteenth entry out of thirty-six.

A commute to work by bus has its advantages.

Let's throw some ratings into the mix here. We'll use a five-star system:

1 - being God-awfully inept and offensive. 2 - being so flawed that it lacks entertainment value. 3 - being entertainment, but a clearly flawed work. Inoffensive and forgettable.
4 - being a perfectly respectable example of How It's Done, but falling short of Art. 5 - being something special, a superior achievement.

The Pillars of the Earth, by Ken Follett - I paid a visit to the former chair of the Shorter College Humanities Department recently and we naturally flung books at each other before parting. This was his selection. Finished. 4 stars.

Percy Jackson & The Olympians: The Lightning Thief, by Rick Riordan - The movie looks like a great deal of fun, but in general I'm a firm believer of reading the book first. So I will. Finished. 2 stars..

Up in the Air, by Walter Kim - Another book purchased simply because the previews for the movie greatly intrigue me. Finished. 3 stars. Loses points on the dismount with a tacked-on "shocking revelation".

Native Son, by Richard Wright - Because I like my reading lists to have some diversity and realized I didn't have any great African-American novels on it. I love Ralph Ellison's Invisible Man and Ellison was connected with Wright, so I selected this to fill the gap.

War & Peace, by Leo Tolstoy - I'm probably being absurdly optimistic in purchasing this book and putting it on my reading list for this year; as anyone can tell you, it's huge, and God knows the block of time it'll require has plenty of other claims on it, the rest of this list included. Still, I've really wanted to read it ever since finishing The Death of Ivan Ilyich, and having it readily available is the first step, so just maybe...

Crime and Punishment, by Fyodor Dostoevsky - And buying Tolstoy made me think of Dostoevsky, whose The Brothers Karamazov I finally finished when I last visited Korea.

The Grapes of Wrath and East of Eden, by John Steinbeck - I've already read Grapes, but I did it back in high school, which really is more or less equivalent to having not read something at all (children are all Philistines; their souls have not yet developed). One of Steinbeck's other novels ranks as an absolute favorite of mine, The Winter of Our Discontent, and one of the particularly proud moments of my time in college was when I had the honor of introducing my Creative Writing professor to it, who afterward declared it one of her all-time favorites as well.

The Angel's Game, by Carlos Ruis Zafon - Zafon's other novel, The Shadow of the Wind, is one of the most enjoyable books I read in '09. My wife's already read this one and told me it's darker, which disappointed her and somewhat disappoints me - Shadow was one of those books where you bounced in your bed at the ending, which is a rarity for me - but so it goes; no doubt it will still be, as Stephen King called Shadow, one gorgeous read.

The Baroque Trilogy (Quicksilver, The Confusion, The System of the World) and Snow Crash, by Neal Stephenson - Apparently a force with which to be reckoned in science fiction, which accounts for why I haven't heard of him. I've received a lot of recommendations from friends who are into the genre, though, and Snow Crash made TIME's "100 Greatest Novels of the 20th Century", so I feel pretty confident these'll be enjoyable. Finished with Snow Crash. 5 stars.

The Golden Compass, by Philip Pullman - I've always been curious about the His Dark Materials trilogy, a fantasy series that's often referred to as the anti-Chronicles of Narnia. I'm not willing to blindly plump for all three, but I'm pretty sure the first installment is a self-contained story, like The Lion, The Witch, & The Wardrobe. So it turns out that the first book was not self-contained, but it was so good Anna and I immediately purchased the next two. I'm on the third volume now. Grade So Far: 5 stars.

The Magicians, by Lev Grossman - What if a bunch of today's adults found out Hogwarts and Narnia were real? Sounds fun. Finished. 4 stars.

Supreme Courtship, by Christopher Buckley - On the strength of his Thank You For Smoking. Finished. 4 stars.

A Farewell to Arms and The Son Also Rises, by Ernest Hemingway - I'd never actually read Hemingway until I picked up_ For Whom The Bell Tolls_ at the airport on my way to my honeymoon destination. I am now of course very much looking forward to reading the rest of his body of work. In March I accidentally found and finished The Old Man and the Sea.

This Side of Paradise, by F. Scott Fitzgerald - Obviously I'm taking the opportunity to fill in a few shameful gaps in my reading experience.

Riding Lessons, by Sara Gruen - Because her Water For Elephants is utterly charming.

Twilight, by Stephenie Meyer - I consider it sort of a duty to read anything that gets as popular as this book. Plus my wife's read them all and wants to be able to discuss them with me. Hey, who knows? I didn't want to read the Harry Potter books, either. Finished. 2 stars.

Her Fearful Symmetry, by Audrey Niffenegger - On the strength of her first book, The Time Traveler's Wife, which reminded its readers of how great science fiction can be when it's not just left for geeks to write. Finished. 3 stars, but not for any observable deficiency; the narrative simply doesn't compel.

The House of Mirth, by Edith Wharton - Since all of her novels are in the public domain now, Amazon asks only ninety-nine cents in return for all thirty-one of them. I actually finished this particular book back in January (we're over a month into '10, after all). Verdict: enjoyable, but The Age of Innocence is far more rewarding to the modern reader. 3 stars.

Between, Georgia, by Joshilyn Jakson - My mother's recommendation. I honestly have no idea.

Being Written, by William Conescu - One of several impulse buys. A minor character in a book realizes his nature and struggles with the author to achieve greater prominence. Finished - and boy, this book wasn't what I thought it would be at all. 4 stars, but I'm disturbed..

Persona Non Grata, by Ruth Downie - My trial installment for a light-hearted series in which an ancient Roman doctor and his slave girl solve mysteries.

Tipperary, by Frank Delaney - In preparation for my Kindle spree I walked about a Barnes & Noble, just letting covers leap out at me. My wife tells me this one did. I naturally no longer remember.

The Plot Against America, by Philip Roth - A tale set in an alternative history in which the Fascists gained political power in America prior to World War II. Why not? Finished. 2.5 stars. Undeniably the work of someone who knows what he's doing, but its message is extraordinarily deceitful and the pace of the plot sometimes unforgivably slow.

The Art of Biblical Narrative, by Robert Alter - Assigned by my Old Testament professor at college, this is one of the books that spearheaded the (re-?)introduction of literary analysis of the Bible to universities in the last century. Obviously I've read it (got a "B" - Dr. Wallace wasn't easy), but I'd like to read it again at a more leisurely pace. And maybe take notes this time. An assured 5 stars.

Foreskin's Lament, by Shalom Auslander - A memoir from an author who has written only one other book to my knowledge, an anthology of short stories collectively entitled Beware of God, which was so side-splittingly hilarious and poignant I'll probably be buying anything with his name on it for the foreseeable future. Finished. 4 stars.

The Bible Unearthed: Archaeology's New Vision of Ancient Israel..., by Israel Finkelstein - A survey of what modern archaeology has to say about the ancient kingdoms of Israel and Judah and their Biblical records. Finished. 3 stars. Fully half the book is dull summarizing of the Bible stories themselves. The rest is very interesting.

Nothing to Envy, by Barbara Demick - Six North Korean refugees describe life beyond the DMZ, and how they escaped it. Being in such close proximity to what may be the most evil regime on this planet almost demands an interest in it, so I've always known that when I returned to Seoul I'd be bringing along more reading material about the DPRK. Finished. 5 stars and very moving.

On Writing, by Stephen King - The best book on writing fiction I've ever read, written by the writer's writer. I owned a physical copy but gave it away.

Brotherhood of Warriors, by Douglas Century - A look into Israel's special forces. Already read this one too, but I need to comb through it again for research purposes. Finished. 4 stars for what it is - but what it is doesn't happen to be that audacious, so don't take that as a strong recommendation.