Reading Idea: The Saga of Recluce 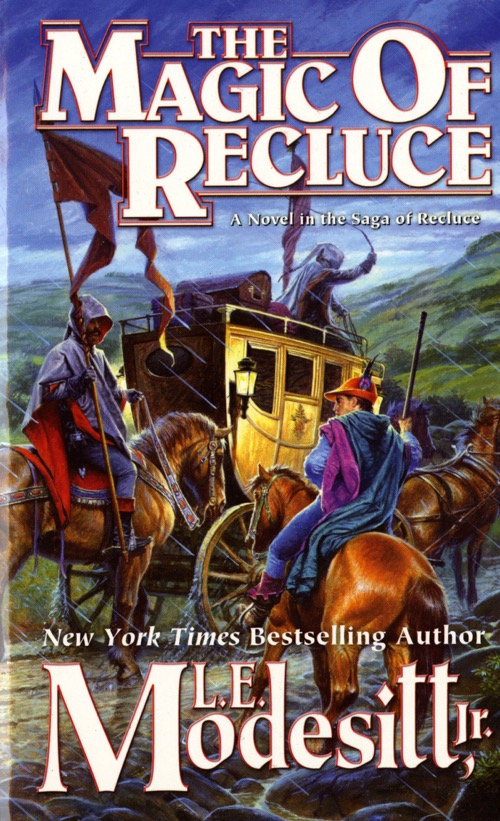 I've somehow never managed to hear of L.E. Modesitt Jr, even though he's written over 60 books. The Tor blog helped me to overcome my ignorance. I read the first book earlier this year and I'm looking forward to reading more.

A Beginner’s Guide to the Fantasy Worlds of L.E. Modesitt, Jr.

“The most important thing you need to know about Recluce—both the saga and the island—is that there is a neverending battle between chaos and order. In their natural state (a.k.a. Balance), these qualities make up all matter; but as white wizards unleash the entropy of chaos and black mages harness the structure of order, these forces become imbalanced. Modesitt’s intention was to subvert fantasy tropes by having the “good guys” wear black, though, as he points out, there is a lot more gray area to it—and not just the “grays” who can manipulate both chaos and order. Even as the first book, The Magic of Recluce, establishes Recluce’s tenets of uniformity and repetition in order to keep chaos at bay, such monotony—even with the safety it provides—bores protagonist Lerris. His lack of engagement with order gets Lerris sent away from home on the dangergeld, or ritualistic journey to learn more about the world before deciding if he will follow Recluce’s rules. But ennui aside, what we’ve learned from all of the dystopian fiction that has been released in the 25 years since the first Recluce book is that order can be just as dangerous as chaos.

While Lerris’ dangergeld is the focus of the first book, he is by no means the series’ protagonist; in fact, each of the characters in the 18 books to date get only one or two novels. In a recent piece for Tor’s Fantasy Firsts series, Modesitt challenged the notion that The Saga of Recluce is a series, considering that they neither follow one protagonist nor take place in “a single place or time”—instead spanning 2,000 years, and the rise and fall of empires worldwide in 20 countries on five continents. And even then, he adds, “the Recluce books aren’t really a ‘saga,’ either, because sagas are supposed to be tales of heroism following one individual or family. And that’s why I tend to think of the Recluce books as the history of a fantasy world.”

The internal chronological order is also vastly different from the publication order—if you’re going by timeline, the series starts with 2001’s Magi’i of Cyador and concludes with 1995’s The Death of Chaos. Modesitt says it’s the reader’s choice to read the books in either order, or neither, the only caveat being that one should read the first book of a certain character before going on to the second.”

I'm going to list out the books in chronological order. I'm a sucker for knowing where in the timeline everything happens.