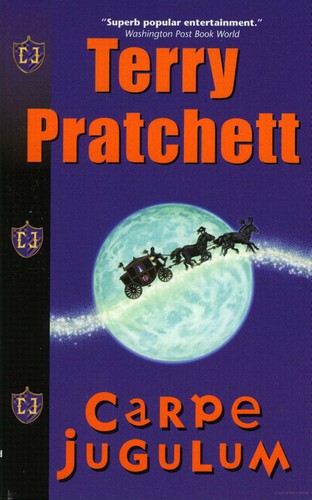 [This book] involves an exclusive royal snafu that leads to comic mayhem. In a fit of enlightenment democracy and ebullient goodwill, King Verence invites Uberwald's undead, the Magpyrs, into Lancre to celebrate the birth of his daughter. But once ensconced within the castle, these wine-drinking, garlic-eating, sun-loving modern vampires have no intention of leaving. Ever.

Only an uneasy alliance between a nervous young priest and the argumentative local witches can save the country from being taken over by people with a cultivated bloodlust and bad taste in silk waistcoats. For them, there's only one way to fight.

Go for the throat, or as the vampyres themselves say...Carpe Jugulum.

The best part of the book is the fact that Lord Magpyr is aware of every single vampire trope—and is determined to be unaffected by any of them. He intends to be the first of a new breed of vampire: invulnerable to anything. The main hitch in his plan isn't the witches. It's his servant Igor, who thinks that the old ways are the best and that his new master is a disgrace to the memory of the old Lord Magpyr.

This book is a humorous send-up for anyone who's ever enjoyed a Frankenstein movie, a Buffy episode, or Dracula itself.