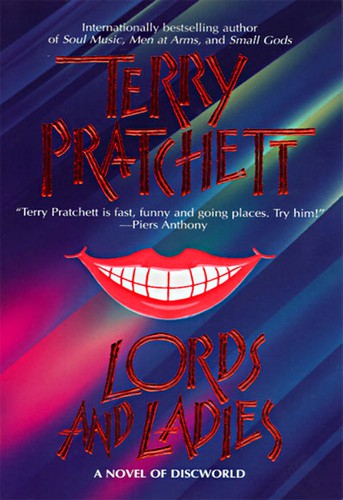 Lords and Ladies
by Terry Pratchett

After Terry Pratchett's death, last week, I felt the need to read more of his novels, in memoriam. When I last read a Discworld novel, I was reading in the "Witches" sub-series. I decided to keep going with that and read Lords and Ladies.

The last novel was a send-up of fairy godmother stories. This was a pastiche of elf (or fairie) stories, primarilyA Midsummer Nights Dream. Pratchett chose to present his elves as amoral monsters who toyed with humanity purely out of a boredom and a desire for entertainment. Their power derived from their ability to make people feel completely overwhelmed by their inferiority to the elves. The overmatched individuals lost all inclination to fight back, feeling that whatever happened to them was just and right.

The surface plot revolved around the wedding of King Verence and Magrat Garlick. Throughout the story, Magrat tries to figure out who she is and what her role in life should be. Granny Weatherwax and Mustrum Ridcully, Archchancellor of Unseen University, both feel regret for paths that they didn't take through life.

In Lords and Ladies, elves are let into the world of men through the actions of young witches who think that their elders (Granny Weatherwax and Nanny Ogg) are exasperatingly old-fashioned. They flout several traditions, including several that were key in keeping elves away from the Discworld. Because of their rejection of tradition, Lancre almost falls under the sway of the elves again. The current generation has to relearn the lessons that led to the traditions of past generations. By the end of the story, they begin following those traditions again, to keep their own families and children safe.

I enjoyed this story on all of the levels that I saw.