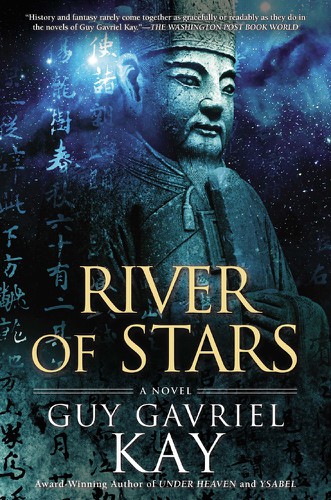 This is another novel of Kitai, Guy Gavriel Kay's analog to historical China. This book takes place in a time roughly equivalent to the early 12th century. Kay described his own setting, in the book's "Acknowledgement" section, along with his reason for working in historical fantasy, rather than historical fiction.

River of Stars is a work shaped by themes, characters, and events associated with China’s Northern Song Dynasty before and after the fall of Kaifeng.

... I am significantly more at home shaping thoughts and desires for Lin Shan and Ren Daiyan, or developing the characters of my two Lu brothers, than I would be imposing needs and reflections (and relationships) on their inspirations: Li Qingzhao, the best-known female poet in China’s history, General Yue Fei, or the magnificent Su Shi and his gifted younger brother. Not to mention other figures at the court (including Emperor Huizong himself) in the time leading up to and through the dynasty’s fall.

But what is the river of stars? In Kitai legends, it is that which lies between mortal men and their dreams. It is what must be crossed over, after death, to reach the afterlife. That's an appropriate title because the major theme of the book is what is remembered of a life, after that life is over. River of Stars focuses largely the life of the main character, Ren Daiyan and explores what he did and how he was remembered.

Kay is fascinated by the ways in which the decisions and events that seem almost trivial at the time become something that reverberates throughout time. He's also fascinated by the opposite side of that: the things that could have been momentous, but sink with barely a ripple because of what was happening elsewhere or because of the way in which a life was cut short.

All of that leads, inexorably I think, to a meditation on the way in which we construct narratives to explain the world around us. I think the result musings were frequently poignant.

He died too young in a war in which too many died.

We cannot know, being trapped in time, how events might have been altered if the dead had not died. We cannot know tomorrow, let alone a distant future. A shaman might claim to see ahead in mist but most of them (most of them) cannot truly do this: they go into the spirit world to find answers for today. Why is this person sick? Where will we find water for the herds? What spirit is angry with our tribe?

But sometimes storytellers want to inhabit certainty. They assume more than mortals ought. A tale-spinner by a hearth fire or gathering a crowd in a market square or putting brush to paper in a quiet room, deep into his story, the lives he’s chronicling, will deceive himself into believing he has the otherworldly knowledge of a fox spirit, a river spirit, a ghost, a god.

He will say or write such things as, “The boy killed in the Altai attack on the Jeni encampment was likely to have become a great leader of his people, one who could have changed the north.”

Or, “Lu Mah, the poet’s son, was one whose personal desire would have kept him living quietly, but his sense of duty and his great and growing wisdom would have drawn him to the court. He was lost to Kitai, and that made a difference.”

However boldly someone says this, or writes it, it remains a thought, a wish, desire, longing spun of sorrow. We cannot know.

We can say Mah’s was a death too soon, as with O-Yan of the Jeni, their kaghan’s little brother, slain in the first attack of a grassland rising. And we can think about ripples and currents, and wonder at the strangeness of patterns found—or made. A first death in the north and the death farthest south in the Altai invasion, in the years of the Twelfth Dynasty when the maps were redrawn.

But then, maps are always being redrawn. The Long Wall had once been the forbidding, fiercely guarded border of a great empire. We look back and we look ahead, but we live in the time we are allowed.

A related theme is the way in which we, of the present, look back at the past and try to draw lessons from it. But that too is a construct. Life happens and is often incomprehensible in the happening. It's only much later that someone can see a pattern or a lesson.

He died on that last thought, not the one about fearing a sword. That had come a moment before, while the man who ended his short span of days (Pu’la of the Altai was seventeen years old, his father’s only son) had been levelling a bow.

It was a similar death—on guard at night, an arrow—to that of another young rider two summers before. O-Yan of the Jeni, fourteen years of age, had been killed by an arrow loosed by Pu’la’s own skilled and deadly father on the night the Altai attacked the Jeni camp, beginning their assertion of themselves upon the world.

There might have been a lesson, a meaning, in this, or not. Most likely not, for who was there to learn of it, and what would the teaching be?

I gained two things from this novel. The first is a continuation of my desire to learn more about Chinese history and culture. Kay has convinced me that that history is rich and deep and worth studying. Second, is a humility about looking back at that history. The events of the past are the sum of the hopes, dreams, fears, and actions of the people of the past. Their stories are what's worth focusing on, more than the supposed lessons of the past.