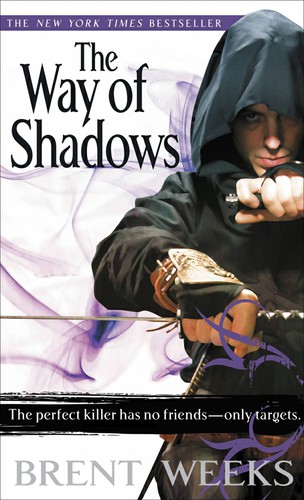 The Way of Shadows
by Brent Weeks

I put this book on my reading list for 2015 because Brandon Sanderson described Weeks' writing as "epic fantasy novels that read with the pacing of a thriller". After reading this novel, I can confirm that Sanderson wasn't exaggerating. This book is an absolute page turner, even as Weeks paints a world worthy of epic fantasy.

And it's a gritty, dark, painful world. Pain, viciousness, and brutality are everywhere. Don't spend too much time hoping for things to come up roses for our heroes—no one will make it to the end of the story uninjured. Azoth is a 10-year old member of a criminal street guild, barely able to survive. He wants to become a "wetboy" (an assassin with magical Talent) because he's tired of being afraid and powerless; he wants the security that kind of power can give him. His desired mentor and teacher is Durzo Blint, the best wetboy in Cenaria.

This is the story of how Azoth becomes Kylar Stern, the wetboy that he always wanted to be. He has to make painful decisions about whether or not to have friends and how to protect the people that he cares about, in spite of trying not to care.

This isn't a great story. But it's a good story that's written very well. I read it to see if Weeks was an author that I wanted to follow closely. Given that I read a 659 page novel in 3 days, I think I've got my answer. I'm already looking forward to the next novel in the Night Angel series.