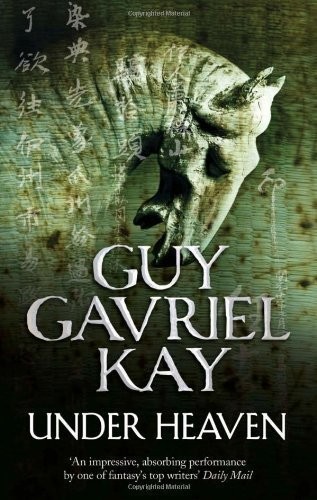 Under Heaven
by Guy Gavriel Kay

This story, set in a fictional country of Kitan, is loosely based on Tang China, the master poets of the dynasty, and the An-Lushan rebellion. I came to the story completely unfamiliar with Chinese history. I was captivated by the story and the beauty of the society that the story depicts.

Near the end of his two years at Kuala Nor, Shen Tai receives a letter from the Taguran princess, giving him a gift of 250 Sardian horses. These are the most magnificent horses for hundreds of miles, coveted by everyone in Kitan. Men would kill for any of these horses, let alone 250 of them. This gift is both a potential death sentence and an incredible opportunity.

The rest of the story concerns both Shen Tai and the empire of Kitan, how they grew and changed and what effect the horses had on the course of history. This is a story about Kitan, the Tang Dynasty, as much as it is about Shen Tai or anyone else.

Like all of Guy Gavriel Kay's novels that I've read, this one is beautifully written and very moving. There are fantastical elements to the story, but they take a back seat to the characterizations and the evocative language. It's a story that forces you to appreciate human nature and the way that history can change on the smallest of decisions. It was a pleasure to read.