You'll Never See It In Galaxy 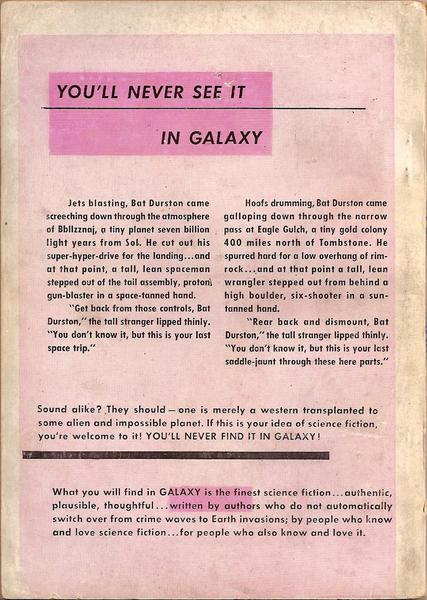 Jet's blasting, Bat Durston came screeching down through the atmosphere of Bbllzznaj, a tiny planet seven billion light years from Sol. He cut out his super-hyper-drive for the landing…and at that point, a tall, lean spaceman stepped out of the tail assembly, proton gun-blaster in a space-tanned hand.

"Get back from those controls, Bat Durston," the tall stranger lipped thinly. "You don't know it, but this is your last space trip."

Hoofs drumming, Bat Durston came galloping down through the narrow pass at Eagle Gulch, a tiny gold colony 400 miles north of Tombstone. He spurred hard for a low overhang of rimrock…and at that point a tall, lean wranger stepped out from behind a high boulder, six-shooter in a sun-tanned hand.

"Rear back and dismount, Bat Durston," the tall stranger lipped thinly. "You don't know it, but this is your last saddle-jaunt through these here parts."

Sound alike? They should—one is merely a western transplanted to some alien and impossible planet. If this is your idea of science fiction, you're welcome to it! YOU'LL NEVER FIND IT IN GALAXY!