By Adam Volle in Culture 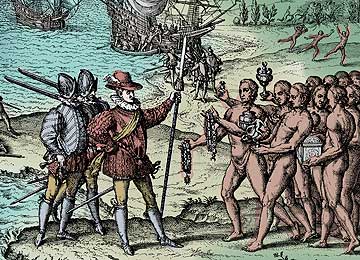 Why do we from the U.S. sometimes call people "Indian givers"? Is it because a generation's worth of experience with the cutthroat prices of 7-11 and the Holiday Inn have convinced us the term is an oxymoron?

As it turns out, no; in fact, it doesn't even have anything to do with India. According to our totally anonymous but still surely trustworthy friends at Wikipedia,

Which, you have to admit, explains a lot - like, for instance, why after the Native-Americans gave Native America to us walking ghosts over a hundred years ago, some of them have had the temerity to ask for it back. Or, even more brazenly, to be paid for it. I mean, yeah right. As if we didn't do them a favor by taking all that tobacco off their hands; every time the Surgeon General wins a lawsuit, our cigarette companies should counter-sue the whole Cherokee nation.

Sheesh. No wonder the Mormons decided these people are Jews. You're feeling all buddy-buddy and then: ka-ching! Your bill, Sir!

But wait: _The Phrase Finder _ suggests that everything isn't so cut-and-dried as we might like to believe.

"It is more likely that the settlers wrongly interpreted the Indians' loans to them as gifts."

OK. Let's face it, that's possible. Seriously, raise your hand if that hasn't happened to you, y'know? An honest mistake. And it does explain why a race so ostensibly into borrowing didn't invent the library before we did; I was all set to accuse Benjamin Franklin of intellectual theft.

Indeed: if this is the sort of miscommunication that's been going on all these years, I can start to see where some of this Native-American hostility toward us honkies is coming from. How long have we White people just been taking their stuff on the assumption that it's all a gift? How many of those "Take One Free" tables I keep running across on reservations might really just be good old-fashioned tourist traps? Good grief, they probably have an arrest warrant out on me by now.

Fellow members of the Master Race, we need to make this right somehow. There's a lot of healing that needs to go on here, and it's probably going to take us a while to figure how to really iron it all out. In the meantime I suggest we start with small tokens of affection.

Maybe we can name our favorite sports teams in their honor.