It's a little-known fact that Steve Ditko, hailed by readers of comic books for co-creating Spider-Man and much of that character's supporting cast, occasionally still publishes new stories.

It's little-known for several reasons. First, all of these new tales can only be found between the covers of small-press magazines with extremely low print runs and sometimes a complete absence of color; Mr. Ditko's refusal to allow any publisher to compromise what he believes to be his artistic integrity has resulted in such publications being his only outlet. Second, the content of Mr. Ditko's stories nowadays is generally unattractive to mainstream audiences, as they adhere entirely to Objectivist principles of morality. All of Mr. Ditko's new fiction is and has now for years been unapologetically and indeed preachily (to the point wherein the narrator often lectures the reader on how to interpret the story) libertarian. Some of his product even eschews the art of fiction entirely and simply serves as visual for his pro-liberty ideas.

The piece of his below, entitled "Mutual Consent/Force", is a great example of that: 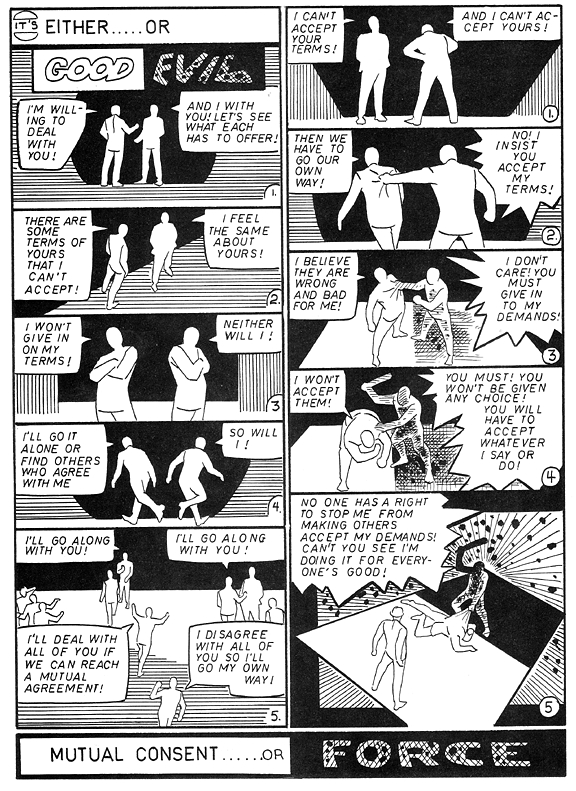 Anyway, thanks to Dinosaurs Garden's putting it up on their site, an online .pdf file containing the whole of Mr. Ditko's long out-of-print "Avenging World" comic book is now available for your perusal, should you be so inclined. It's an extremely well-drawn presentation of our world's problems and their libertarian solutions, hosted in an endearingly cliche manner by our own beleaguered Planet Earth.

This entry was tagged. Libertarian Philosophy