Review: *A Feast for Crows* 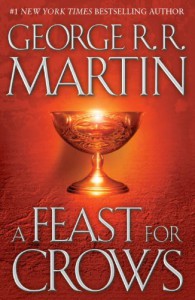 A Feast for Crows by George R.R. Martin

Fans had to wait five years after the publication of Storm of Swords (November, 2000) before they got their hands on A Feast for Crows (November, 2005). In my review of Storm, I mentioned that “the book was a non-stop parade of events, swirling ever more madly as the body count rose ever higher.” That pace couldn’t last and it didn’t.

Feast opens with a new locale—Oldtown—and new characters. It jumps from Oldtown to Dorn, another location that’s new to readers. It was, in some ways, a restart to the story. Once again, events pick up right where the previous book left off. This time the story focuses on the events and characters in and around King’s Landing. Cersei is awakened to learn about the murder of Lord Tywin Lannister. She fancies herself as the second coming of Lord Tywin and immediately assumes full power as the Queen Regent. She’s determined to make her mark on the Kingdom.

An early quote in the book, from Lord Rodrik, establishes the theme and sets the course for the rest of the book.

“Crows will fight over a dead man’s flesh and kill each other for his eyes. We had one king, then five. Now all I see are crows, squabbling over the corpse of Westeros.”

It’s apropos as most of the book involves various characters maneuvering for influence, believing that the worst is over and all that’s left is to consolidate power and feast on the pickings. It’s a vital part of the story (it feels true to life) but it makes for a much slower read.

Many of the familiar characters are missing from this book. Martin originally intended to write one book but, as it grew and grew, that wasn’t possible. He told the stories of half of the characters in Feast for Crows. He saved the stories of the other half of the characters for Dance With Dragons. Many favorite characters are missing from this book; including Bran Stark, Jon Snow, Daenerys Targaryen, and Tyrion Lannister. With so much of the action happening King’s Landing, several other characters get short thrift: Samwell Tarly among them. That accounts for about half of the reason I gave this book 3 stars instead of 4.

I also struggled to follow the flow of time in this book. I couldn’t quite tell whether events were happening over a relatively short period of time (a matter of weeks or a very few months) or a longer period of time (half a year to a year or more). There seemed to be enough happening to justify a period of a year or so.

On the other hand, we heard almost nothing from the missing characters: no news from the Wall, no further rumors of Daenerys, and nothing at all from Tyrion. That seemed a little unrealistic given how much attention was paid to these characters in earlier books. It almost seemed like Martin was trying to avoid spoilers for events in Dance With Dragons.

Because I spent so much time wondering about the flow of time and wondering whether it was really possible for nothing newsworthy to be happening elsewhere, I lost a little bit of the suspension of disbelief. That’s the other half of the reason why I feel this book only deserves 3 stars instead of the 4 stars that I’ve given to the other books in the series.

As I’ve done for the first three books, I’m posting my own spoiler notes of what happened and where things stood by the end of the book.

Catelyn Stark, though dead, apparently spent most of the book leading a band of “broken men” around the river lands. She didn’t figure in the book, until she decided to hang Brienne, at the end.

Arya Stark lands in Braavosi and becomes an acolyte of the Faceless Killers. She’s still trying to figure out who she is, alternating between Cat, a seller of fish, and Arya of House Stark. She learns even more about how to observe the world around her and collect information. At the end, Arya kills a deserter from the Night’s Watch and Cat confesses to it. She drinks a bit of “warm milk” and wakes up the next morning, blind.

Sansa Stark lives in the Eyrie, posting as Petyr Baelish’s “natural born” daughter, Alayne. She helps to care for the weak and sickly, Lord Robert Aryn. Petyr eventually reveals that she is bethrothed to Harrold Hardyng, Robert's heir. If and when Lord Robert dies, Alayne will reveal her true identity and will lay claim to both the Eyrie and Winterfell.

Tyrion Lannister does not appear in the book. His story is told in A Dance With Dragons.

Jamie Lannister continues to be rehabilitated as the reader sees more and more of his true core of honor and fidelity to duty. When Queen Cersei begs him to become the Hand of the King, he refuses to renounce the lifetime vows of the Kingsguard. When confronted with the need to capture Riverrun, he manages to do so without violating his vow not to take up arms against the Tullys or the Starks. Disgusted by his sister’s recent actions, he refuses to return to King’s Landing to defend Queen Cersei.

Cersei Lannister rules King’s Landing as Queen Regent. She spends most of the book growing increasingly more paranoid about the people around her and manuevering to put only trustworthy people into positions of power. The result is that she makes increasingly more stupid decisions as she surrounds herself with complete dunces. By the end of the book, she’s managed to get herself arrested and imprisoned by religious fanatics that she herself raised to power. Sweet, sweet irony.

Daenerys Targaryen does not appear in the book. Her story is told in A Dance With Dragons.

John Snow does not appear in the book. His story is told in A Dance With Dragons.

Bran Stark does not appear in the book. His story is told in A Dance With Dragons.

Stannis Baratheon does not appear in the book. His story is told in A Dance With Dragons.

This entry was not tagged.