The new film adaptation of Beowulf's justly been receiving loads of huzzahs for its groundbreaking use of 3D technology (The Economist has devoted an article to how exactly it works), but its screenplay has received far less - if any - respect from the critics.

This is perplexing, since what writers Roger Avary and Neil Gaiman have written is something of an achievement - a new, nearly legitimate interpretation of England's oldest epic poem. The general failure of film critics to recognize this may be due to the same ignorance which resulted in their complaints about Frank Miller's 300 earlier this year. No review of that movie was apparently complete without the observation, soon trite, that the directors had forgotten to give their Spartans body armor. But this only revealed how many of those reviews' writers had actually missed one of the movie's fundamental points: 300 isn't an attempt to accurately recreate a historical event, but an attempt to accurately recreate the spirit of how Ancient Greece would retell such a historical event. The Spartans are nearly naked not because that is how they really fought, but because that is how Greek artists would depict them.

Director Zack Snyder himself has said as much:

Beowulf is the same kind of creation, only far, far more ambitious. Not only does it recreate with a sometimes wince-inducing measure of honesty the kind of world in which the story purports to take place, but with only two notable (and ultimately unnecessary) exceptions that I could count, the movie is completely faithful to its source material - yet reinterprets that material in such a way that the themes of the story are doubled in strength.

The story of both the original poem and the movie is easy to summarize: an over-the-hill king named Hrothgar is besieged by Grendel, a monster who enters his hall every night and eats a couple of the king's apparently very loyal subjects. Beowulf arrives and rips the monster's arm off, then follows the beastie into its cave in order to kill its mother, too. As proof of his kill, he brings back Grendel's head. Years later, Beowulf dies saving his kingdom from a dragon. The End.

What holds all of this together, in the poem, is the comparison readers are invited to make between King Hrothgar at the beginning of the poem and King Beowulf at its end. Beowulf the movie amplifies this theme by answering the questions about the poem most of us never even thought to - but should have - asked: Why doesn't Grendel kill Hrothgar himself? Why does Beowulf return to Hrothgar with only Grendel's head? And really, the dragon's just kind've a random tack-on, isn't it?

Well, not anymore, it's not. Gaiman and Avary explain Grendel's torturing of King Hrothgar as the confrontation between an illegitimate, freakish son and his deadbeat dad. The kingdom's wrecking by a monster is the result of its king's fornification with a bewitching succubus. The same demoness successfully seduces Beowulf, when he arrives in her cave to kill her, and thus the warrior later returns with only Grendel's head.

This coupling between man and Satanic siren, of course, results in the birth of a new monster, which bedevils the crowned Beowulf many years later: the dragon. Everything thus comes full-circle and Beowulf finds himself in the exact same position as his predecessor - naturally, the very best of scenarios in which to contemplate the two mens' differences.

See what I mean about the themes being strengthened? Yes, liberties are taken in that new "scenes" are added to the story. But they're really nothing more than most theologians do with the Bible itself, imagining details that do not contradict what is known, in order to make sense of story points otherwise not understandable. 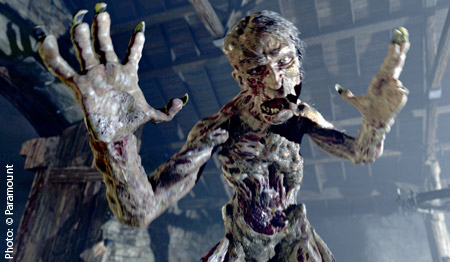 The consequences of failing to at least pay child support are brutally exposed in Zemeckis's film..

I shouldn't really be surprised that these particular writers pull it off. I'm used to Hollywood bungling its adaptations, but Neil Gaiman is a British import who's made his name writing modern takes on mythology; it's his niche, and he's good at it. Stardust is another example of his work.

And really, that might be why I enjoyed Beowulf, and you should take any recommendation here with a grain of salt; Beowulf can play the part of a straight-up action-adventure story for your typical moviegoer, but it's also a game being played by a couple of lovers of literature with their brethren. Fun-averse purists aside, inhabitants of English Departments far and wide are watching this movie with glee. And they understand why Beowulf feels it necessary to get naked before wrestling a giant.

Full enjoyment of the show is thus reserved for a select audience of which I, for once, am a member.

So, not often getting the chance to be part of an elitist "in-crowd" at anything, I'm naturally going to go see it again. Have fun doing whatever it is you, y'know, non-English Major types do with your lives.

This entry was tagged. Review