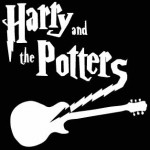 I could post today about the end of Atlanta football star Vick's sentence, or how the fubar state of New York is now considering a totally insane 57% tax on its highest-earning residents - but I really wouldn't be a friend to you if I didn't instead take this opportunity to instead inform you about the recent phenomena that is Wizard Rock.

I learned about this wondrous (dare I say "magical"?) music subgenre from today's _USA Today _article on the subject, which profiled no less than four of the Harry Potter-inspired bands, including pioneer group Harry & The Potters.

Bands describing themself as part of this new movement generally seem to be of the punk rock persuasion, stylistlcally-speaking. Their lyrics range from the touching and somewhat maudlin, as in this little stanza by Draco & The Malfoys:

_He never gave me the attention he gave Harry

He never showed an interest in me

I watched him from afar, wishing I had a scar

So he would see the great wizard I could be_

_Dumbledore, we all fight for you tonight

In our hearts we'll never let you die

Your love is keeping us alive_

According to USA Today there are now as many as 500 of these bands churning out similar numbers - and counting. So if you were wondering just what new kind of music scene will emerge to dominate this next decade's charts like Hip Hop in the 90's...

This entry was tagged. Entertainment