Jon R. Gabel writes in the New York Times today, saying that we shouldn't fear the cost of health care reform because the CBO has a long history of underestimating the savings from reforms.

In the early 1980s, Congress changed the way Medicare paid hospitals so that payments would no longer be based on costs incurred. ... The Congressional Budget Office predicted that, from 1983 to 1986, this change would slow Medicare hospital spending (which had been rising much faster than the rate of inflation) by $10 billion, and that by 1986 total spending would be $60 billion. Actual spending in 1986 was $49 billion. The savings in 1986 alone were as much as three years of estimated savings.

In the 1990s, the biggest change in Medicare came with the Balanced Budget Act of 1997, a compromise between a Republican-controlled Congress and a Democratic administration. ... The actual savings turned out to be 50 percent greater in 1998 and 113 percent greater in 1999 than the budget office forecast.

In the current decade, the major legislative change to the system was the Medicare Modernization Act of 2003, which added a prescription drug benefit. In assessing how much this new program would cost, the Congressional Budget Office assumed that prices would rise as patients demanded more drugs, and estimated that spending on the drug benefit would be $206 billion.

Actual spending was nearly 40 percent less than that.

Then I saw this graph, of Congressional health care underestimates. (Courtesy of John Goodman, courtesy of the Joint Economic Commitee. You can read the full report.) 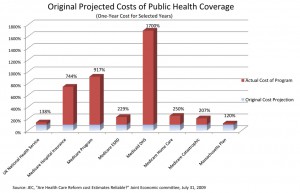 It looks like health care costs are underestimated far more than they're overestimated.