Is The World Getting More Or Less Violent?

This morning in church, our pastor asked what had happened to war and violence, since Henry Wadsworth Longfellow wrote I Heard the Bells on Christmas Day. Had it gone up or down? What would Longfellow think of our world today?

I immediately responded that, of course, violence had gone down. Longfellow would love the our world. I was surprised when Pastor Chris said that things had just gotten worse and worse since then. He showed this depressing graph, taken from a History Today post on the alarming increase in wars. 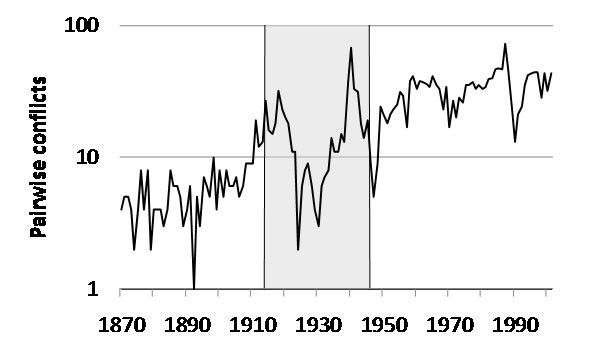 That confused me. I've been hearing that world violence is at an all time low. PBS aired an interview on this exact topic, two years ago.

Despite news of terrorist bombings and crackdowns in Syria, two recent books argue the world has never seen so little war and violence. Steven Pinker, author of The Better Angels of Our Nature, and Joshua Goldstein, author of Winning the War on War, discuss.

GOLDSTEIN: Well no because the past 100 years were - there was a big explosion of violence in the early part of the 20th century, but the 17th century was no picnic, either. The Thirty Years' War destroyed a third of the population of Germany, and back through history, there have been terrible wars much of the time.

And even in prehistoric times, as many as a quarter of the men in a society, not infrequently, died in wars. So it's actually a new thing and something that's developed in the least 60 years and especially the last 20 years.

... PINKER: Yes, the decline of war that scholars such as Joshua Goldstein have documented is one of a number of historical declines of violence. Others include the plummeting of rates of interpersonal violence, one-on-one homicides, which have fallen by about a factor of 35 since the Middle Ages in every European country for which statistics are available.

Another example is the abolition of cruel and barbaric institutionalized practices like human sacrifice, like chattel slavery, like the use of the death penalty for trivial infractions, the burning of heretics, bear-baiting, the list goes on.

And yet another one is the even more recent targeting of violence on smaller scales directed against vulnerable sectors of the population like racial minorities. So we've seen an elimination of the practice of lynching in the United States, which used to take place at a rate of about 150 a year and fell to zero by 1950. Rates of rape have fallen, rates of domestic abuse. Popularity of spanking and other forms of corporal punishment have gone down.

Even more recently, practices that wouldn't even have been categorized as violence in previous decades, like bullying, have now been targeted for elimination. A few years ago, bullying was just childhood, boys will be boys. Now we've brought it in under the umbrella of violence and sought to minimize it for the first time in history.

CONAN: Yet we always hear: the 20th century, the most violent, the bloodiest century in human history.

PINKER: Well, people who make that claim never cite numbers from any century other than the 20th, and as Joshua Goldstein has pointed out, the 17th century with its wars of religion, the 14th century with its Mongol invasions, many other centuries have atrocities that can hold their head high when compared against the 20th century.

The annihilation of native peoples of the Americas and Australia and Africa, the Islamic and Atlantic slave trades racked up horrific death tolls.

What's the story behind that scary graph? Where did that come from and does it contradict Goldstein and Pinker? I looked into it and I don't think it does contract them. Here is how History Today described the study.

The graph below illustrates this increase in pairwise conflicts. It only includes wars between states and does not include civil wars. Conflicts range from full-scale shooting wars and uses of military force to displays of force (sending warships and closing borders, for example). Although Harrison and Wolf’s study does not measure the intensity of violence, it reflects the readiness of governments to settle disputes by force.

According to Harrison and Wolf, this increase in the frequency of pairwise conflicts can be explained by two principal factors: economic growth and the proliferation of borders. The number of countries has thus almost quadrupled since 1870, rising from 47 countries in 1870 to 187 in 2001.

Harrison continued: ‘More pairs of countries have clashed because there have been more pairs. This is not reassuring: it shows that there is a close connection between wars and the creation of states and new borders.’

This study has three flaws. One, it includes displays of force rather than actual uses of force. Thus, India and Pakistan are considered to be at war, even though they're not actually in a state of war. The U.S. is considered to be at war with Iran, etc. This isn't good, but it's different than what most people expect when they hear of an increase in wars.

Second, the study leaves out civil wars, rebellions, coups, etc. As the authors note, the number of countries has quadrupled in the last 150 years. All of the earlier civil wars and unrests that formerly occurred internally now have the potential to be wars between separate nations. The actors and grievances haven't necessarily changed, but the way they're measured has. The left side of the graph understates violence compared to the right side of the graph.

Thirdly, the report doesn't measure the intensity of violence. World War I and World War II each count as one war. So does Desert Storm and the Iraqi invasion of Kuwait. The first two wars claimed orders of magnitude more lives than the latter two wars. In this study, they both count exactly the same. Again, that's not what most people would think of when they think about a more violent world.

I think this report (and accompanying graph) are misleading. They give the impression that violence has been steadily increasing over the last 150 years. In fact, the opposite is true. We live in a wonderful time of decreasing violence. War hasn't ended. There are still wars, rebellions, and conflicts. There are still abuses of power and tyranny. But we are far less likely to die from violence than during any other time in human history. I think that's something worth celebrating.

This entry was tagged. Government