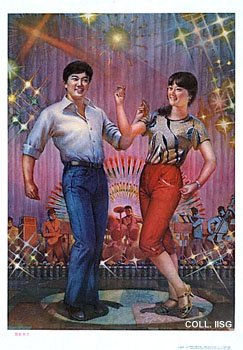 Above: A Chinese propaganda poster from 1986. No wonder Communism has appealed to so many. I would've called this The Communists party, but its painter named it _Youthful dance steps. _Oh well.

Say what you want about China's Communist leaders, but they get results, and they get them quickly. From the latest Newsweek:

"In the 10 years since Hong Kong's return to Chinese sovereignty, official statistics show that the number of "working poor"—defined as those who earn less than half the median income—has nearly doubled."

The article itself, of course, naturally goes on to blame this 100% increase in poverty on "turbocapitalism".

Which, you have to admit, is at any rate a great name, and we here at Minor Thoughts will probably be using it a lot from now on until we can finally lay claim to the word as our new domain name.