Its troubles are over, Guys

By Adam Volle in Science 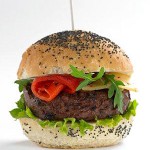 Test: Can you tell whether this cow was treated well or not?

How much histrionic handwringing about this beef recall do we have to endure? From The New York Times, presumably nicknamed "The Gray Lady" because it's gone senile, writes:

"A nauseating video of cows stumbling on their way to a California slaughterhouse has finally prompted action: the largest recall of meat in American history... A lot of that beef has already been eaten, and so far, thankfully, there have been no reports of illness. But the question Congress needs to ask is how many people need to get sick or die before it starts repairing and modernizing the nation’s food safety system?"

Am I the only one to ask the question of how cows being killed "inhumanely" (and that's really an interesting term to apply to the death of something that isn't human, isn't it?) results in beef that is not fit for consumption? Even if we waterboard the things before putting them through the grinder, their meat is still meat. A stressed cow does not equal a poisonous cow.

Slap a fine on the meatpackers to appease the heifer-huggers and serve 'em up. Send some to my house.