Dan McLaughlin wrote this, at the end of a blog post for National Review. And I'm quoting it, because I particularly liked the sentence that I bolded.

Lee was no hero; he fought for an unjust cause, and he lost. Unlike the Founding Fathers (even the slaveholders among them), he failed the basic test of history: leaving the world better and freer than he found it. And while he was not responsible for the South’s strategic failures, his lack of strategic vision places him below Grant, Sherman and Winfield Scott in any assessment of the war’s greatest generals. We should not be building new monuments to him, but if we fail to understand why the men of his day revered him, we are likelier to fail to understand who people revere today, and why. And tearing down statues of Lee today is less about understanding the past than it is a contest to divide the people of today’s America, and see who holds more power. That’s no better an attitude today than it was in Lee’s day.

Much of today's political fighting is cloaked in the language of justice, morality, and virtue. But it often feels more like gleeful displays of dominance than it does sober exercises in judgment. The end result may be good — removing statues that honor seriously flawed heroes — but the process can create bitterness and resentment rather than healing and unity.

Jeffrey Tucker wrote, at the Foundation for Economic Education, about the differences between the alt-right and libertarianism. I enjoyed, and agreed with, his descriptions of what libertarians believe.

Creating a Harmony of Interests

A related issue concerns our capacity to get along with each other. Frédéric Bastiat described the free society as characterized by a “harmony of interests.” In order to overcome the state of nature, we gradually discover the capacity to find value in each other. The division of labor is the great fact of human community: the labor of each of us becomes more productive in cooperation with others, and this is even, or rather especially, true given the unequal distribution of talents, intelligence, and skills, and differences over religion, belief systems, race, language, and so on.

And truly, this is a beautiful thing to discover. The libertarian marvels at the cooperation we see in a construction project, an office building, a restaurant, a factory, a shopping mall, to say nothing of a city, a country, or a planet. The harmony of interests doesn’t mean that everyone gets along perfectly, but rather than we inhabit institutions that incentivize progress through ever more cooperative behavior. As the liberals of old say, we believe that the “brotherhood of man” is possible.

The libertarian believes that the best and most wonderful social outcomes are not those planned, structured, and anticipated, but rather the opposite. Society is the result of millions and billions of small acts of rational self interest that are channelled into an undesigned, unplanned, and unanticipated order that cannot be conceived by a single mind. The knowledge that is required to put together a functioning social order is conveyed through institutions: prices, manners, mores, habits, and traditions that no one can consciously will into existence. There must be a process in place, and stable rules governing that process, that permit such institutions to evolve, always in deference to the immutable laws of economics.

The libertarian celebrates the profound changes in the world from the late Middle Ages to the age of laissez faire, because we observed how commercial society broke down the barriers of class, race, and social isolation, bringing rights and dignity to ever more people.Of course the classical liberals fought for free trade and free migration of peoples, seeing national borders as arbitrary lines on a map that mercifully restrain the power of the state but otherwise inhibit the progress of prosperity and civilization. To think globally is not a bad thing, but a sign of enlightenment. Protectionism is nothing but a tax on consumers that inhibits industrial productivity and sets nations at odds with each other. The market process is a worldwide phenomenon that indicates an expansion of the division of labor, which means a progressive capacity of people to enhance their standard of living and ennoble their lives.

as many commentators have pointed out, both libertarians and alt-rightist are deeply suspicious of democracy. This was not always the case. In the 19th century, the classical liberals generally had a favorable view of democracy, believing it to be the political analogy to choice in the marketplace. But here they imagined states that were local, rules that were fixed and clear, and democracy as a check on power. As states became huge, as power became total, and as rules became subject to pressure-group politics, the libertarianism’s attitude toward democracy shifted.

A New Flag for the New South

For the past two days, I've been listening to Dan Carlin's conversation with Sam Harris. This morning, I heard an exchange around the Confederate Flag that caught my attention. First, Dan floated the thought of a redesigned Confederate flag, to show regional pride without showing racism.

I would love to interview these folks, because whenever someone writes me a letter about this, they always say "It's not about the slaves and it's not about the racial situation, it's about the right to seceede, to protect your life, it's a right to do all ...", in other words, take every reason for the civil war besides the slavery aspect and they will say it's about that because nobody's, or very few people I've ever spoken to, say "Yeah, I fly the flag because black people are inferior and blah, blah, blah." I would love to see a notation then to the flag, you know there's a lot of flags from other countries where something will happen and a new regime will take over or something will change and they'll alter the flag slightly, you know we'll always put another star on our flag when a new state came in. Seems to me you could put something like a chain being snapped or something in the center of the flag or something that indicated that this flag isn't in favor of slavery or this is the post-slavery Confederacy or "Welcome back black people to the New South", whatever. Something that just sort of said, "You know the little chain on the flag being freed, yeah, that shows that this flag does not represent something that said that the slavery was the part that we would like to see returned."

A few minutes later, Dan came back to that thought and expanded on it a bit more.

In the emails that I'll get about this people will talk about "It's just a pride in your heritage sort of thing". I think the pity then is that there isn't an alternative symbol that if you wanted to say "I'm a Southerner and I'm proud of it" that you could show that didn't have the same overtones, that didn't appear to some people that you're not just saying "Yes, I'm proud of the South but I'm proud of things the South did before the Civil War". I mean the United States for example has a whole bunch of other flags that we've flown at one time or another, the Gadsen Flag, all those kinds of things, which different people can appropriate to show different aspects or different ideas. Seems to me, if you're into Southern pride—and I don't think there's anything wrong with having pride in your heritage, or your grandfathers, or anything like that. It's a pity that the symbol you could use to show that has all sorts of other overtones that are not just deeply offensive but that make people who are valued members of your community feel, not just like second class citizens, but maybe even a little afraid. Who would want to show that in a way that took other Southerners and, instead of making them feel proud, would make them feel the opposite of proud?

I decided to take that idea and run with. What if I took the Confederate flag and changed the colors? I decided to keep the basic elements, to represent some continuity of Southern culture, but change the colors to signify that this is a New South that doesn't embed the racism and hate of the past.

I think the defining features of the original flag are the bold, red field that dominates the flag and the two blue bars that crisscross the field. That's what I need to change, to make this feel like an updated, more modern, version of the flag.

For my first attempt, I wanted to deemphasize the red. I moved the blue from the bars to the field and moved the red from the field to the stars and the outline of the bars.

I didn't like how bright (eye searing?) the red and white bars were. I decided to make the field white and match blue bars with white stars. I deemphasized the red even more, relegating it to the outline of the bars.

The second attempt was better than the first, but I didn't like the bright expanse of white, now that the entire field was white. I made the field blue again and decided to get rid of the red entirely, replacing it with green. Now the stars are green and the outline of the bars is green.

I'll say that the green is there because it can represent the rebirth of the South into the new South.

This is nearly identical to the third redesign. In this one, I removed the outline of the bars, to make for a starker contrast against the blue field and a further distancing from the Old South design.

What do you think? Can you imagine seeing one of these flags as a common symbol of the New South, one not associated with racism and hate?

This entry was tagged. Culture Reform 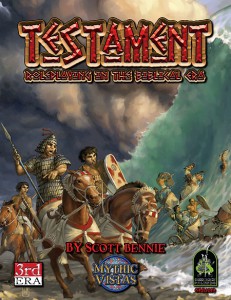