Guardians of the Galaxy Vol. 2 fails to meet Groot expectations →

I'm glad I'm not the only curmudgeon that failed to enjoy the new Guardians movie. The Globe and Mail also panned it.

After the original earned $770-million (U.S.) worldwide – all without boasting a name-brand star or much built-in affection for a talking tree named Groot – a sequel was inevitable. But it didn't have to be this sequel, which swaps out amusement for arrogance, delight for disdain.

At least a dozen times, for instance, this new movie laughs at its own jokes – literally. The characters of Drax (an alien warrior) and Rocket (the aforementioned talking raccoon) regularly deploy punchlines or watch ones whiz by, and then cackle for what seems like minutes on end. (Some choice jokes pivot around the size of one character's turds and another's urgent need to urinate.) There is even a running bit about the fine art of winking at your audience. And if that is not enough to hammer home Guardians' particular brand of misplaced confidence, then the filmmakers hope snippets of seventies' AM radio pop will inject a sly bit of nostalgic levity into the proceedings. See, we're just here for a good time, not a long time – why else would Looking Glass, Electric Light Orchestra and Cheap Trick be blasting on the soundtrack?

It is tittering, unrestrained filmmaking at its most self-indulgent – high, as it were, on its own supply.

This cinematic smugness touches everything, all while clinging to the law of diminishing returns. The plot, for starters, is a weak facsimile of the 2014 film, solely designed to connect set-pieces that rehash best-loved moments from the original. Wasn't, say, that first prison-escape scene so funny and unexpected? Well, maybe you'll also like a new escape sequence that triples the body count while erasing the number of laughs and adding Jay and the Americans' 1964 hit Come a Little Bit Closer to the soundtrack, for no reason in particular? Oh, remember when hundreds of Xandarian space ships converged to battle Ronan's warship back in the first movie? That was mighty cool, so why not revisit that here but with an even larger fleet of space ships? Did you enjoy the Vin Diesel-voiced Groot? Good, because now he's a cute widdle Baby Groot, voiced by what sounds like Diesel on helium, and present in nearly every other frame.

Look, I like Groot. But that's a fair bit of criticism. Dude was everywhere, almost as though someone were thinking of the potential for moving massive amounts of Baby Groot action figures and dolls over the next couple of months. 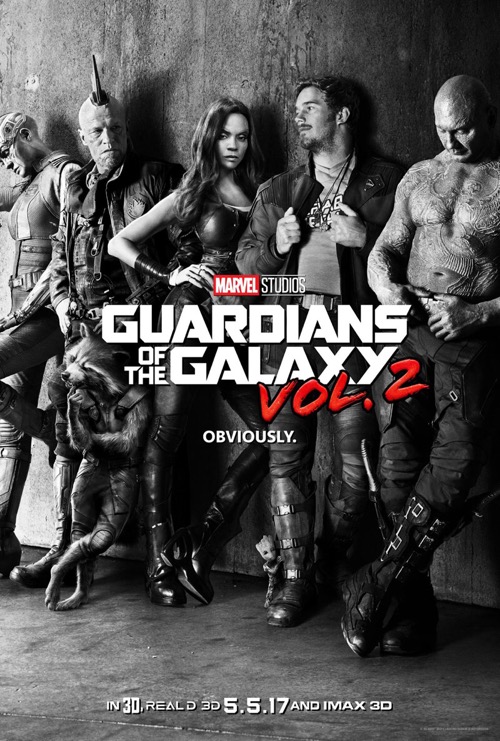 Guardians of the Galaxy, Vol. 2

Now the sequel is out, I've seen it, and I'm disappointed. I was primarily looking for two things: a fun soundtrack and a fun movie. I don't feel like I got either.

The soundtrack was pretty bland. None of the songs stuck in my head and, aside from the in-movie conversation about Brandy, I couldn't actually tell you what any of them were. Maybe it's because I'm mostly oblivious to songs from the 80's. Or maybe the song selection was bad. Either way, this isn't a soundtrack that I feel a need to listen to again.

The movie itself tried too hard. Gunn wanted to recreate the fun of the first movie, but I think he mostly failed. Between overly clever sequences, boring emotional journeys, and humor that wasn't funny, the movie fell flat.

The opening fight sequence with Baby Groot was clever, but I've seen the "fight happens in the background while the viewpoint character is unaware" gimmick before, in other movies. That set the tone for the rest of the movie as most things felt like something that I'd seen before in other places. For instance: the remotely piloted ships that The Sovereign used — piloted by gamer teens — came straight from Ender's Game. The Sovereign's genetic engineering and general demeanor came from Lois McMaster Bujold's Cetagandan Empire, which I wouldn't have minded had the script included any kind of a nod in that direction other than ripping off the idea.

For the rest, I found the overarching story to be banal. Of course the second movie has to be about how the gang that appeared to have gelled at the end of the first movie is really falling apart and becoming experts at in-fighting. After the fun of seeing everyone come together at the end of the first movie, I really wanted a movie where we got to enjoy the cast working together for a full story, not one where we have to wonder why the cast doesn't seem to like each other as much as we do.

And about those personal journeys that everyone went on during the story. Was it really necessary for everyone to go on an emotional journey? Sure, Starlord has father issues. Apparently, so do Rocket, Yondue, Mantis, Gamora, and Nebula. In addition, Gamora and Nebula have a whole sister frenemy thing going on. It's all both too much and too little. Too much because it's a bit overwhelming keeping up with who has their mope on for which reason. And too little because every character's emotional space gets cramped by the need to make room for every other character's emotional baggage.

Finally, humor. I really enjoyed the humor in the first movie. I didn't enjoy the humor in this movie. Between the turd jokes and the non-stop penis references, it seemed to be aimed at an audience of boys, somewhere between kindergarten and 8th grade. No thanks.

I was mostly bored by the on-screen hijinks, I wasn't laughing, and I didn't leave the theater humming the songs from the soundtrack. Guardians of the Galaxy, Vol 2 was a rollicking disappointment. Better luck next time guys.

Doctor Strange used this quote in reverse. The movie eases the viewer into magic by smuggling in magic as just advanced technology. The Ancient One and Dr. Strange talk about cellular regeneration as Strange gets his first introduction to magic. By the time that the story moves into astral projection and the weirder forms of mysticism, we've already been lulled into accepting magic through our acceptance of the miracles of advanced technology.

The movie's weakest point is that the magical school is both too large and too small. During a couple of scenes, Stephen Strange is shown practicing magic with 15–20 other students. But when the time comes to throw down with evil, the fighting force is limited to the Ancient One, Mordo, Wong, and Strange.

It's strange that Strange gets thrown into battle so quickly, even as he's constantly told that he's nowhere near ready. Certainly the plot would dictate that Strange be the hero of his own movie, but it seems like an odd choice to show other students but not actually use them.

The surprise character of the movie is Strange's cloak. It shows a surprising amount of personality for a normally inanimate object. As a non-living side kick, it rivals BB-8 in expressiveness. I'm looking forward to seeing more of the cloak in future movies.

This may be one of Benedict Cumberbatch's best movies. He's one of those quirky actors that usually ends up portraying a variant of himself on screen. In this movie, he became Stephen Strange to an impressive degree. I spent the entire movie watching Strange, without ever once thinking of Sherlock or Khan.

I rewatched the trailer for Marvel's Ant Man and I still don't understand the appeal of the character. At the most basic level, I find it hard to believe that shrinking to the size of an ant is all that useful of a super power. Sure, it becomes a lot easier to infiltrate the bad guy's lair. You can more easily act as a spy or sabotage really small things. But you don't magically gain in strength. Ants may be a lot stronger proportionally, but at the end of the day you're still a microscopic speck on someone's wall or kitchen counter.

I get Batman's appeal: a tech powered ninja detective. I see where The Flash can be useful: sprint in and out of sticky situations. Even without super strength, the ability to sucker punch your opponent 30 times in an instant is powerful. But minuscule size? I don't see it. It's not something that intuitively appeals to me as something that would make for a good story or a good movie.

I'm unlikely to see the movie unless it gets really good reviews.