Early last year, MetaFilter had a spirited discussion about SF. Various people were arguing about supposed Progressive bias in the Science Fiction Writers of America (SFWA) and whether an author like Robert Heinlein would even be welcome in SF today. Several people doubted that he could even win a Hugo today.

John Scalzi stepped in to say that not only could he still win, but that he would definitely win today. Scalzi essentially argues that today's SF field is broader than yesterday's. Yes, there are more Progressive voices. But authors are still writing stories in the Heinlein tradition, they still sell well, and they still get nominated for awards.

If we grant that a resurrected Heinlein would read the lay of the land, commerce-wise, could he win a Hugo today? Sure he could -- or at the very least could get nominated. Charlie Stross wrote a homage to late Heinlein called Saturn's Children which was nominated for a Hugo in 2009; its sequel Neptune's Brood is on the ballot this year. Robert J. Sawyer, who writes in a clear, Campbellian style, is a frequent Best Novel nominee, most recently for Wake, which has a clear antecedent in The Moon is a Harsh Mistress. James SA Corey rolled onto the Hugo Novel list in 2012 with Leviathan Wakes, which is solidly in the Golden Age traditon, updated for today's audiences. And I can think of at least one recent Hugo award winner who has a thrice-Hugo-nominated military science fiction series, who has been explicitly compared to Heinlein all through his career. So could Heinlein win a Hugo? Hell yeah, he could -- and if he were as commercially smart today as he was back in the day, it wouldn't even be question of if, but when.

Review: The Man Who Sold the Moon 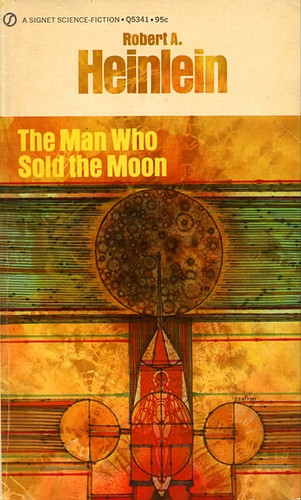 The Man Who Sold the Moon
by Robert A. Heinlein

This is another collection of some of Heinlein's early stories. In this case, more of his "Future History" stories. The volume is almost worth reading just for John Campbell's introduction, explaining why Heinlein was such a great writer.

Simply put, he faced the challenge of conveying the mores and patterns of a strange cultural background, the technological background that created and sustained that culture, and the characters that inhabited that culture. He managed to do it brilliantly, over and over again, without resorting to the info dumps that are so often present in literature.

These stories, "Life-Line", "Let There Be Light", "The Roads Must Roll", "Blowups Happen", "The Man Who Sold the Moon", and "Orphans of the Sky" all illustrate that part of Heinlein's talent. And they're all enjoyable.

"Life-Line"—how would the world react if someone could predict the instant of anyone's death?

"The Roads Must Roll"—Cars do not roll upon the roads. The roads themselves roll. What might force that innovation, what kind of world would it create, and what risks would come with that world?

"The Man Who Sold the Moon"—The one man who most wants to visit the moon, who will do the most to push humanity to the moon, may be the one man who never sees the moon. Poignant.

"Orphans of the Sky"—Residents of a generational starship believe that The Ship is all there is to the universe. They've systematically reinterpreted all of the scientific texts as various forms of allegory and myth. But what happens when one man is convinced of the truth and tries to act the missionary to his fellow voyagers?

This collection is definitely worth a read.

Shaun Usher posted a wonderful letter, from Robert Heinlein, on Letters of Note. Heinlein sent the letter to Theodore Sturgeon.

"I went into a horrible dry spell one time. It was a desperate dry spell and an awful lot depended on me getting writing again. Finally, I wrote to Bob Heinlein. I told him my troubles; that I couldn't write—perhaps it was that I had no ideas in my head that would strike a story. By return airmail—I don't know how he did it—I got back 26 story ideas. Some of them ran for a page and a half; one or two of them were a line or two. I mean, there were story ideas that some writers would give their left ear for. Some of them were merely suggestions; just little hints, things that will spark a writer like, 'Ghost of a little cat patting around eternity looking for a familiar lap to sit in.'

The entire letter is posted. It's great reading. Heinlein is my favorite author and this letter demonstrates why. He was very creative and I would have loved to have seen the full stories that he could have written from these ideas.

This entry was tagged. Robert Heinlein