By Joe Martin in Biblical 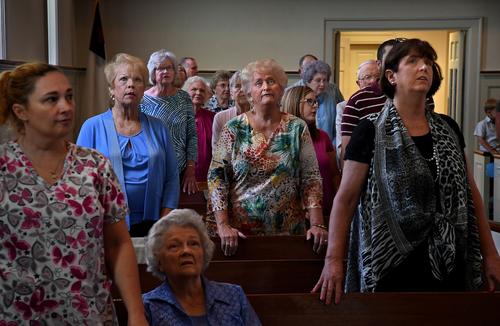 This article—and this passage—has lived in my head, since I first read it, nearly 4 years ago. If you’ve talked politics with me, I’ve likely mentioned it at least once.

A Jewish theologian once asked Jesus what the greatest commandment was. Jesus responded by giving his own twist on the Shema.

How do American Christians hear, understand, and follow Jesus’s words? Let’s check in with some good, Christian, God-fearing folks from rural Alabama.

God, Trump and the meaning of morality — The Washington Post

Linda nodded. It wasn’t just Muslims that posed a threat, she said, but all kinds of immigrants coming into the country.

“Unpapered people,” Sheila said, adding that she had seen them in the county emergency room and they got treated before her. “And then the Americans are not served.”

Love thy neighbor, she said, meant “love thy American neighbor.”

Welcome the stranger, she said, meant the “legal immigrant stranger.”

To her, this was a moral threat far greater than any character flaw Trump might have, as was what she called “the racial divide,” which she believed was getting worse. The evidence was all the black people protesting about the police, and all the talk about the legacy of slavery, which Sheila never believed was as bad as people said it was. “Slaves were valued,” she said. “They got housing. They got fed. They got medical care.”

Luke tells of a situation in which another theologian quoted the Shema to Jesus, as the qualification for gaining eternal life. Then he wanted Jesus to praise him for how well he was following this commandment and asked Jesus, “Who is my neighbor?” That’s when Jesus busted out the story of the priest, the Levite, and the Samaritan.

When Jesus finished telling the story, he asked a question of his own.

Which of these three, do you think, was a neighbor to the man who fell into the hands of the robbers?” He said, “The one who showed him mercy.” Jesus said to him, “Go and do likewise.”

I Was Wrong About Robert E. Lee

Adam called me out on my respect for Robert E. Lee, after I posted "Dominance Displays Over Statues". He argued that Robert E. Lee, as a man, wasn't worthy of my respect. As proof, he pointed me towards "The Myth of the Kindly General Lee", published in The Atlantic.

I should have blogged about this then, but didn't. Recent events have forced me to do now, what I didn't do then. A city councilor from Charlottesville, VA wants to remove a statue of Robert E. Lee. That brought out the alt-right to stage an ugly demonstration supporting the statue — and Robert E. Lee.

I'm going on the record now: Adam was right and I was wrong. Robert E. Lee is not worth supporting and I oppose both the actions of the alt-right in Charlottesville and the cause that they're agitating for.

This is the history that I wasn't taught in Southern schools and that I didn't bother to research on my own.

The strangest part about the continued personality cult of Robert E. Lee is how few of the qualities his admirers profess to see in him he actually possessed.

The myth of Lee goes something like this: He was a brilliant strategist and devoted Christian man who abhorred slavery and labored tirelessly after the war to bring the country back together.

There is little truth in this. Lee was a devout Christian, and historians regard him as an accomplished tactician. But despite his ability to win individual battles, his decision to fight a conventional war against the more densely populated and industrialized North is considered by many historians to have been a fatal strategic error.

But even if one conceded Lee’s military prowess, he would still be responsible for the deaths of hundreds of thousands of Americans in defense of the South’s authority to own millions of human beings as property because they are black. Lee’s elevation is a key part of a 150-year-old propaganda campaign designed to erase slavery as the cause of the war and whitewash the Confederate cause as a noble one. That ideology is known as the Lost Cause, and as historian David Blight writes, it provided a “foundation on which Southerners built the Jim Crow system.”

The argument here is that slavery is bad for white people, good for black people, and most importantly, it is better than abolitionism; emancipation must wait for divine intervention. That black people might not want to be slaves does not enter into the equation; their opinion on the subject of their own bondage is not even an afterthought to Lee.

Lee’s cruelty as a slavemaster was not confined to physical punishment. In Reading the Man, the historian Elizabeth Brown Pryor’s portrait of Lee through his writings, Pryor writes that “Lee ruptured the Washington and Custis tradition of respecting slave families,” by hiring them off to other plantations, and that “by 1860 he had broken up every family but one on the estate, some of whom had been together since Mount Vernon days.” The separation of slave families was one of the most unfathomably devastating aspects of slavery, and Pryor wrote that Lee’s slaves regarded him as “the worst man I ever see.”

Lee’s heavy hand on the Arlington plantation, Pryor writes, nearly led to a slave revolt, in part because the enslaved had been expected to be freed upon their previous master’s death, and Lee had engaged in a dubious legal interpretation of his will in order to keep them as his property, one that lasted until a Virginia court forced him to free them.

When two of his slaves escaped and were recaptured, Lee either beat them himself or ordered the overseer to "lay it on well." Wesley Norris, one of the slaves who was whipped, recalled that “not satisfied with simply lacerating our naked flesh, Gen. Lee then ordered the overseer to thoroughly wash our backs with brine, which was done.”

During his invasion of Pennsylvania, Lee’s Army of Northern Virginia enslaved free blacks and brought them back to the South as property. Pryor writes that “evidence links virtually every infantry and cavalry unit in Lee’s army” with the abduction of free black Americans, “with the activity under the supervision of senior officers.”

​Lee even sounds like a modern, alt-right, white supremacist.

Nor did Lee’s defeat lead to an embrace of racial egalitarianism. The war was not about slavery, Lee insisted later, but if it was about slavery, it was only out of Christian devotion that white southerners fought to keep blacks enslaved. Lee told a New York Herald reporter, in the midst of arguing in favor of somehow removing blacks from the South (“disposed of,” in his words), “that unless some humane course is adopted, based on wisdom and Christian principles you do a gross wrong and injustice to the whole negro race in setting them free. And it is only this consideration that has led the wisdom, intelligence and Christianity of the South to support and defend the institution up to this time.”

Lee had beaten or ordered his own slaves to be beaten for the crime of wanting to be free, he fought for the preservation of slavery, his army kidnapped free blacks at gunpoint and made them unfree—but all of this, he insisted, had occurred only because of the great Christian love the South held for blacks. Here we truly understand Frederick Douglass’s admonition that "between the Christianity of this land and the Christianity of Christ, I recognize the widest possible difference."

​And he tacitly encouraged abominable behavior by others.

Lee is not remembered as an educator, but his life as president of Washington College (later Washington and Lee) is tainted as well. According to Pryor, students at Washington formed their own chapter of the KKK, and were known by the local Freedmen’s Bureau to attempt to abduct and rape black schoolgirls from the nearby black schools.

There were at least two attempted lynchings by Washington students during Lee’s tenure, and Pryor writes that “the number of accusations against Washington College boys indicates that he either punished the racial harassment more laxly than other misdemeanors, or turned a blind eye to it,” adding that he “did not exercise the near imperial control he had at the school, as he did for more trivial matters, such as when the boys threatened to take unofficial Christmas holidays.” In short, Lee was as indifferent to crimes of violence toward blacks carried out by his students as he was when they were carried out by his soldiers.

Tyler Cowen shares this quote from Douglas Irwin’s book Clashing Over Commerce: A History of US Trade Policy.

The South’s enormous economic stake in slavery far outweighed the impact of protective tariffs on its income. In 1860, the aggregate value of slaves as property was $3 billion, nearly 20 percent of the nation’s wealth. The value of slaves was more than 50 percent greater than the capital invested in railroads and manufacturing combined, a calculation that excludes the value of land in southern plantations. Slavery generated a stream of income that enable overall white per capita income in the south to approximate that of northern whites. In the seven cotton states, nearly a third of white income came from slave labor.

That’s staggering. Growing up in the South, I had an inherent bias towards finding reasons for the Civil War that didn’t involve slavery. For instance, Southern anger over Northern tarrifs. And, sure, that was a factor. But these numbers are a convincing indication that slavery was the chief economic reason for the Civil War.

In terms of both capital investment and income, slavery was the foundation of the Southern economy. Ending slavery would have financially wiped out many of the Southern whites, especially the rich and the powerful. Moral arguments against slavery barely stood a chance — to paraphrase Upton Sinclair, “It’s difficult to get a man to agree to end slavery when his income depends on his maintaining it”.